Christmas Eve in Montevideo.  Early in the day there was a raucous party downtown different from any Christmas Eve celebration I have ever seen.  University students took to the streets of the historic district.  Nearly every store and restaurant was closed, but a roar of voices floated down the streets like drifting smoke.  As I walked towards the grassy plaza, I passed a couple of staggering women sharing a bottle of liquor.  They were immediately swept up by a group of shirtless, drum-banging men skipping in rhythm to their own beat.  It was hard not to get captured by the energy of the crowd.  I climbed a stone wall and looked down into a complete mix of faces.  My eyes stopped at every blonde head of hair I passed looking for Maria.  Did Maria mention Montevideo?  Maybe not.  But maybe Punta del Este for New Year’s.

A young woman with curly black hair and green eyes looked up at me and smiled.  She swayed with the music, causing her lime green skirt to flutter like a blowing leaf.  She reached up and handed me a bottle of rum.  I took it and swallowed a mouthful that my body was not yet ready for.  I coughed into my shoulder as I handed the bottle back.  Hesitant to join the crowd in Montevideo, I sought refuge in the iglesia matriz, an ornate church with shiny marble floors and an expansive nave, but oddly silent and empty on Christmas Eve.  I was alone with the ornate tomb of Mariano Soler, the first archbishop of Montevideo.  Was he really inside?  I moved closer touching the marble exterior with my fingers.  I sensed someone behind me and spun around.

“You are too early,” said a man wearing blue jeans and a black t-shirt and holding a mop.  Of course.  Everyone outside would need time to sober up before they attended Christmas mass.

I walked the twenty kilometers to my aunt’s house along the beaches of the Rio Plata in Montevideo.  The waves lapped at my feet as I walked barefooted carrying my sandals in my hand (by the way, sandals are not meant for walking great distances as my blisters proved).  Along the Ramba, the main pedestrian stretch, men and women jogged or rode bicycles.  On the beaches, fathers playfully chased their children into the harmless waters.  Sailboats drifted across the horizon.

It’s a young city, a romantic city.  The sun was setting and people of all ages sat on benches, sipping mate, which they brought in thermoses, patiently waiting for the sun to dip gently into the river.  A raspy voice sang out from above, I turned around and searched the overlooking hill for the source.  It came from an old man sitting on the grassy hill.  He was sitting alone with a cup of mate in his hand. 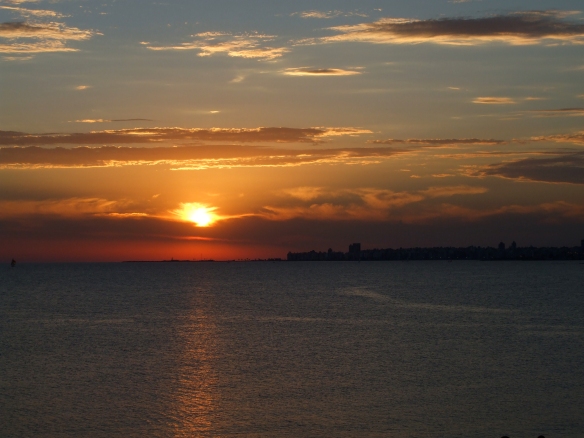 Later that night I sat outside in the dark along the sidewalk of a neighborhood listening to a cascade of whistles overhead.  The Christmas Eve skies in Montevideo are illuminated with  fireworks filling the sky in a dazzling display of colors.  It’s different from the well-synchronized shows I’ve seen in the United States.  In Montevideo, color touched every piece of space in all directions.  There is something about light poking through darkness that beckons you to come closer.