In the mid 60’s, a young Mario Andretti worked his way through the ranks of professional drivers by racing stock cars. A rubber company sponsor delivered the tires to the track without treads, so that the proper pattern could be cut in on site, customized for the conditions and track and driving style. This was state-of-the-art, for everyone knew that a tire had to have treads to grip the track.

One day at practice, Mario anxiously awaited the delivery of his tires so he could shake out a new car for the race that weekend. But the delivery was delayed until an hour before the track closed. Mario, not wishing to lose a day of practice, asked that they be installed as they were- slick, uncut. Every one warned him he would slide right off the track for everybody knew a tire had to have grooves to function properly.

Mario insisted, saying he was more interested in just getting to know the car, and would push for speed another day. He challenged the track, pushing only as fast as he felt he could control the car.

He set a new track record that day, not just by a few seconds, but by fifty per cent.

Reason said that tread gripped the road, kept the car from sliding off due to angular momentum on the corners. No one doubted the assumption. Mario demonstrated the actual physics, overlooked by a generation of reasonable people. The grip of the tire is determined in large part by the area of rubber in the contact patch, the more the better. Cutting grooves into the tire only diminished the amount of rubber in contact with the track, making them less “sticky” than having no tread at all.

Now everyone runs on slicks- it is the reasonable thing to do.

We don’t believe the dinosaurs thought about the comet that wiped them out, but I’m sure it pissed them off. The whole consciousness of Gaia, Mother Earth, was offended by that death blow. Life had evolved to fill every niche; land, air, and sea teemed with it.  Stable for millions of years, Mother Earth had achieved perfection, she thought.

Then that outside force, a war hammer from the stars, and Nature started over, this time not just to fill every biosphere of the earth, but to face down threats from the stars as well. She knew it would take more than just biology; it depended on emergence, characteristics of a complex system where the whole is greater than the sum of the parts. Complex systems like our large brains; we call it intelligence, the ability to reason.

20 million years later and here we are. Intelligence is expensive, the power to reason comes at great energy costs to the organism, and there has only been one species that has made the cost workable. Us, with maybe the large sea mammals holding a back-up copy of the basic software.

There was a time when the human species was on the endangered list, a time when there were only a few thousand of us. But we made it through that narrow gate, we made our large expensive brains work for us, and now we rule the planet. Some of nature’s processes are still outside of our control, but we’re working on gaining control of even those.

So, we are Gaia’s tool, evolved to extend the shield of life beyond the boundaries of our own atmosphere. And what are we doing?  Struggling with petty arguments, backing away from the great challenge for which nature created us, turning our backs on the stars.

Today we struggle with a government that has shut down, unable to do even the most basic of things. Our sky watch is dark. And in less than a month, an asteroid will pass between us and the orbit of the moon, death whistling by to remind us that the universe is uncaring, if not downright hostile.

The sky is falling. Reason has failed. Winter is coming. 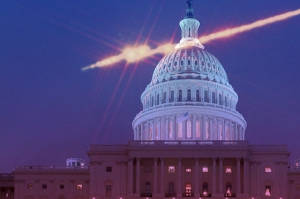